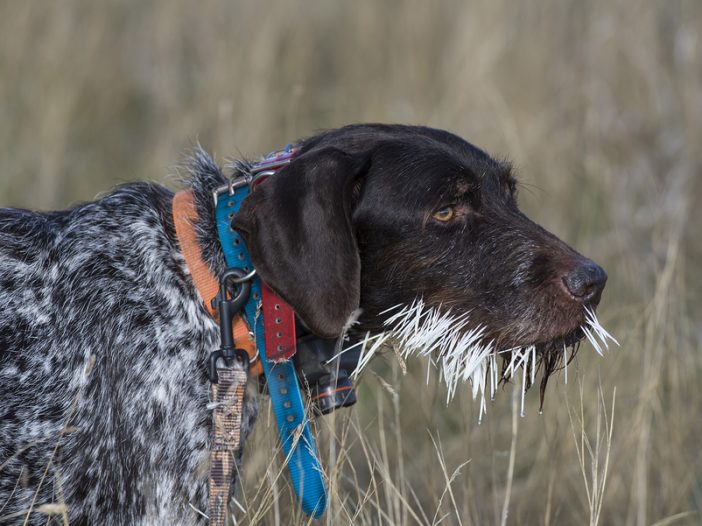 Now, I will first say, I would never wish any illness or injury on any animal. However, if I had to pick one emergency case to see forever (Groundhog Day-style) it would be the PPQ dog. I specifically remember the need for this signalment to be recurring as a geographical criterion for where I wanted to practice when looking for my first job.

There is nothing like a “PPQ” as we call it in the biz. I have seen technicians squabble over who gets to help as the patient is en route to the clinic countless times. There is no more rewarding case. Most of the time, after sedating a young and otherwise healthy patient, you get the sweet satisfaction of the subcutaneous release of barb after barb after barb… You observe the bewildered, grateful expression of a creature who has just realized that the pokey things have magically disappeared. You have grateful owners, as many quickly realize at home that even the nicest dog in the world is unlikely to hold still for too long to get them yanked. You have a slightly intoxicated patient that walks themselves out the door.

Many dogs do not learn. I remember working at an emergency clinic during university and seeing a family with 3 “multiple offenders” Labradors over sequential summers. They would all get into one at the same time.  Imagine how much those ER visits cost! One of my first emergency calls as a veterinarian was a pair of huskies that had gotten into one in the yard while their owners were gone. Fourth time for the one, third time for the other.

They often came to me in the middle of the night, the patient has been missing all day.  Sometimes they came the next day, sometimes several days later. There is no other ailment that I have heard more ridiculous at-home remedies. I had a client call once after his dog had an encounter. He had a friend tell him to soak a rag with starter fluid, let the dog “huff” it and then cut off all the ends of the quills. “That didn’t seem like a good idea to me, Dr. Amanda,” he admitted, “so I called you.” I was grateful to help. Common sense is not common. Sedation is the best way to remove them. It is so much easier and safer for a veterinarian to remove them with sedation than to try at home.

Sometimes things do not go so well. If people didn’t bring their pet in right away the quills can migrate, fester, and cause other problems. I once removed a BUNCH of quills from a dog’s cheek. She had been pawing at them and some had broken off.  We always removed all of the ones we could see and feel, and we could sometimes dissect out ones near the surface. Sometimes we needed to leave some and monitor them very closely. We warned our client of this and we were so grateful that we had. He came back 2 days later- one had migrated. Either end was stuck in her upper and lower eyelids. It had moved while she was sleeping and just missed her eyeball. I have also heard of cases of the quills moving to the lungs, heart and great vessels. A colleague of mine had a patient that never woke up from sedation, and suspects one went into his jugular vein. Thankfully, these cases are rare, and such incidents are less likely to occur if the quills are removed promptly.

I always wonder, what about the other guy?  How often does the porcupine walk away unscathed?  They sure are cute. I remember seeing one on my front porch at 5:30 am at our house in Canada. Just looking in the window. My dogs sleeping in the other room, none the wiser. I like to think that my dogs are less likely to encounter them since they are not to be trusted off-leash. It is something for you to think about if you live or hike with dogs in Porcupine Country. Super-Cute Hiking Hazards. Veterinary Job Security. I guess if you are going to have an emergency with a young and otherwise healthy dog, this might be the best one to get.

Dr. Amanda Doran is a practicing certified hospice and palliative care veterinarian (CHPV) in Duluth, MN. She has worked in the veterinary field for nearly 20 years and held every position from kennel assistant to veterinarian. Dr. Doran’s articles have been featured on DrAndyRoark.com, and she has been a guest multiple times on Dr. Roark’s Cone of Shame podcast. Dr. Doran’s medical interests center on end of life care, animal welfare, effective client communication, personal resilience for veterinary professionals, and the human-animal bond. She shares her home with her partner in crime, 2 goofy husky shepherds and a crabby old peach tabby. She also slings tarot cards for fun.