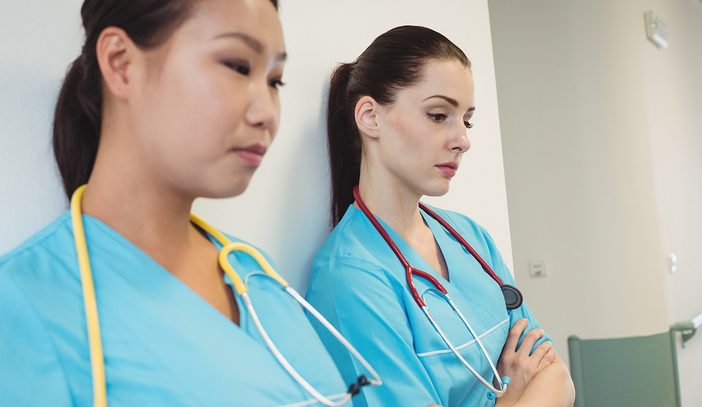 I’m full of compassion. It hurts. It truly hurts. I’m not running out of it. I’m not failing to care about my job but I am running out of patience for people who should care and they don’t.

As veterinarians, we constantly get told, “If you cared about my pet you would do it for free.” If you cared about my animal then you would figure out what is wrong with them. If you cared! If you cared! I do care and I want to help your pet, but I can’t be the only one in this equation. Owners need to care as well, not project their anger onto us.  Day after day the same situation consistently occurs and it is causing many veterinarians to become depressed and even hate their jobs.  We have compassion, the owners don’t.

I saw a young dog the other day with a history of limping for four weeks. The dog was happy but obviously not using its front right leg.  It was swollen and painful to the touch. The owners kept trying to convince me that the dog wasn’t painful. I had to convince them that the reason it isn’t walking on the leg is because it hurts.  I wanted to sedate the dog, feel the leg under sedation, and take some radiographs to make sure we didn’t have a fracture. The owners declined everything and almost left without pain medication. They told me if I cared then I would have reduced the cost to “fix” the problem. I wanted to help the dog but the owners didn’t care enough to let me.

A few days before that I saw a cat that had been acting lethargic. It was an indoor/outdoor cat. The first thing I noticed was that the cat was covered in flea dirt, fleas, and its gums were pale white. The owner allowed me to do some blood work to confirm anemia but then refused to let me treat the cat. “You want me to put those chemicals on my cat! It’s going to kill him!” The fleas were killing the cat and they need to be dealt with. This is fixable and preventable!  She left with the cat. We found out a few days later that the cat died. I could have saved the cat. I wanted to save the cat. I cared about that cat. The owner did not.

Yesterday I saw a dog that we had seen multiple times for the same issue. The dog gets infected with whipworms, it starts having awful diarrhea and weight loss, and eventually, the owner brings it in for us to treat it. Usually by the time he brings the dog in it is on death’s door and needs to stay in hospital on IV fluids and de-worming medication. The owner refuses to put the dog on a monthly parasite prevention medication because he thinks we just want more money from him. So yearly, like clockwork, the dog comes in for treatment and then goes home to get re-infested. I care about this dog. I don’t want this dog to continue to get sick. But the owner doesn’t care.

Day after day cases like this come in. People who don’t understand often say veterinarians need to stop complaining about their jobs. It’s our JOB to work with animals. Yes, that is true, but it shouldn’t be my job to care more about your pet than you do. I will continue to care though because I have a lot of compassion and it’s not running out despite what the definition of compassion fatigue states. But I am growing increasingly depressed with humans and their lack of compassion. I will never blame the animals, for they are just innocent bystanders.  I am not sick of caring, just sick of caring more than other people.