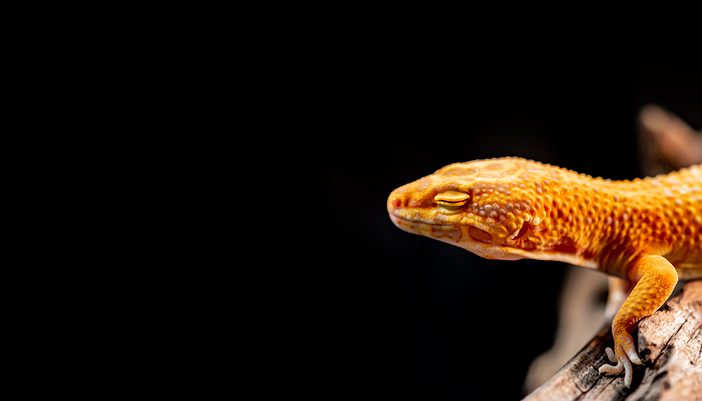 Being a Licensed Veterinary Technician working in a small animal and exotic practice for over a decade I’ve seen my fair share of ill exotic pets over the years. So, when an appointment popped up on the schedule for a leopard gecko with an abnormal tail, I prepared like I would for any other exotic appointment. I mentally readied myself for the husbandry discussion, printed all the care handouts, grabbed the gram scale, and walked into the room. I was reminded that day no matter how long you have been in this field, always expect the unexpected.

This was not your average gecko; he was emaciated, dehydrated, covered in retained shed skin, squinting eyes, and was dragging a completely necrotic tail. It was clear he was in desperate need of a tail amputation surgery and supportive care. So, an arrangement was made, he was signed over into our care and surgery was scheduled for the following day.

Surgery was a success, and the next step was for the frail leopard gecko to receive rehabilitation and I was the natural choice after successfully rehabilitating and re-homing several reptiles in the past; I thought this experience would be no different. I brought him home that night with a bag of medications to temporarily join my zoo and began the process of daily charting, photo-taking, and inspecting his every move. He started a drug regime of pain medication and antibiotics, daily soakings to correct his dehydration, as well as perfecting his cage temperature, lighting, and humidity. During this time, he refused to chase his prey (crickets and other bugs) so I was forced to hand feed him daily.

It was miraculous how quickly his tail begun to repair itself! As he healed this frail leopard gecko became feisty! Every time I touched him to feed him, give him medications or inspect his amputation site he would give it his best attempt to bite me. Lovingly I gave him the only name that fit, Cujo. As time went on and I continued his care, Cujo mellowed. Maybe because he felt better not having that tail behind him, maybe the pain medications were working, maybe he loved the sound of my voice (he would perk up when he heard me talking to him) or maybe it was consistent confident handling. But within a few weeks, Cujo became more of an ironic name, because now he is the sweetest leopard gecko you will ever meet!

As the weeks passed, I was able to discontinue the medications as his tail grew and healed. He spent a lot of time in his humidity house and with every shed his color became brighter and brighter. An eye flush with saline and a course of antibiotic eye drops did the trick to stop his squinting. His eyes then appeared normal, however, he still did not chase his prey and walked with more caution than a leopard gecko should. This is when I came to the daunting realization that I had a visually impaired leopard gecko that would require hand-feeding for life.

Now I had mentioned before that I have successfully rehabilitated and re-homed many reptiles over the years. And I was not looking for any more pets when I started this journey, especially not a leopard gecko. But there is something special about Cujo. After weeks of nursing him, seeing him perk up when he heard my voice, carrying him around on my shoulder so he can supervise my care of the other animals; I was growing attached to this little guy. And I started thinking, who would want a half tailed, partially blind gecko that would have to be hand-fed for life anyways?

It has been two years now and Cujo’s tail has grown back thick and fat (regrown tails are never the same as a leopard gecko’s original tail), his color is bright tangerine orange, and he is fat, happy and healthy. I’m sure you can guess how this story ends, Cujo now lives happily with me in my zoo. I started this journey with a scrawny, dehydrated, honestly pathetic looking leopard gecko, and with a lot of TLC ended up with a beautifully perfect Cujo!

My name is Nicole Harchuk I am a Licensed Veterinary Technician working in small animal and exotic practice. My favorite part of my job is the opportunity to educate and share my passion for veterinary medicine. I also enjoy traveling and attending conferences and continuing education classes to expand my knowledge. Additionally, I recently started back to school to pursue a Bachelor’s degree in Management. In my spare time, I enjoy caring for my “zoo” of reptiles and Poonchkei the orange tabby cat, as well as, scrapbooking, reading, and spending time with friends.