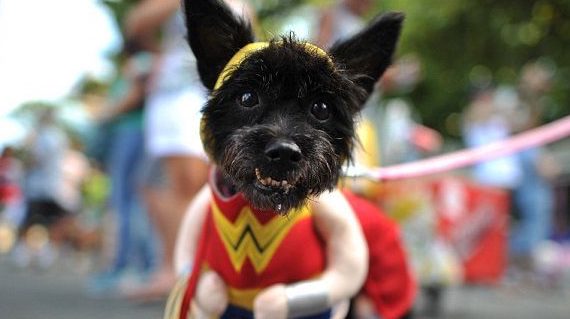 I’m very picky with my movie choices. I mean, I don’t have a lot of free time to begin with and movies are expensive so if I’m going to spend an afternoon seeing one, I don’t want to screw around. It better be good.

To be honest I wasn’t even planning on seeing Wonder Woman, because she hasn’t been a  part of my life since my Underoo-wearing Justice League days. But I had a free afternoon with my daughter and the movie seemed to be getting good reviews, so we went to see it.

It was great. Beyond great. It made me realize the reason I wasn’t into superhero comics and movies wasn’t because I didn’t like superhero stories, it’s just I hadn’t ever seen one that truly inspired me. Like, the Wonder Woman I remember flew around in an invisible jet and lassoed people, which was cool but not exactly aspirational. But at least she was a hero, which is better than the 95% of women represented in comics as passive decorations, victims, or sidekicks.

This, though, this was different. I saw in this story so many strong amazing women, so many veterinary colleagues, and it made me immediately want to lobby the next big vet conference to hold a screening. I spent a lot of time in the theater quietly whispering “YAS QUEEN” and I’d like to be in a room where I could say it a little louder and I feel like my colleagues probably would be down with that.

If you are waffling on whether or not to see this gem, go and do it, and bring your friends and your kids. You’ll love it, and she’ll probably remind you of a few people you know. Here’s why:

1. It never occurs to Wonder Woman that she isn’t supposed to be there.

When Diana leaves her home to go into the world at large, she has spent her entire life preparing herself for her job that she’s really good at it. What she didn’t expect was that the world didn’t know what to do with her. She doesn’t look or act like anyone else in WW1 era London, man or woman, doesn’t pay attention to how things “have always been done”, and she doesn’t care. She strolls into high level meetings with a “what?” look on her face, takes the lead without asking permission, and brushes off input she doesn’t need. She is confidence personified, taking the seat at the table without waiting for it to be offered because, really, it never would have been.

2. She wears whatever the hell is comfortable and functional.

There’s a great scene in the movie where her friends are attempting to help her fit in by dressing her up as a proper Victorian lady. In the dressing area she’s evaluating which skirts are best for landing a roundhouse kick (none, really.)

But when it’s time for battle she loses the petticoat and gets her gladiator on. Unlike the creepy Lynda Carter era uniform which, let’s face it, seems to have intentionally offered too little support if you get my drift, this Diana wears armor. I have no doubt that if she needed coveralls to get the job done she’d have rocked those too.

It never occurs to Diana that she should be anything other than who she is, that she should hide some parts of her in order to get others to take her more seriously. She cruises down the streets of London carrying her sword and shield like the warrior she is, and also stops halfway down the road to coo at a baby she finds adorable. She doesn’t ever apologize for the way she looks or the clothing she wears, and moves through the world with the expectation that you just better accept it. She succeeds on her own terms.

4. Her badassness comes from a place of genuinely believing she is going to make the world a better place.

Diana is truly a compassionate person (or is that Amazon? Goddess?) Her motivation comes from that guileless place, and she goes into it expecting naively that people will recognize the value of her work, support her, thank her. Of course they don’t. At some point she realizes that the world doesn’t really deserve it, and maybe doesn’t deserve her, but she saves it anyway. Not because she needs that salve to her ego, but because she can’t see herself doing anything else.

5. She doesn’t ask other people’s opinions and feels free to ignore unsolicited advice.

There is a scene called No Man’s Land, which I don’t want to spoil too much, that unexpectedly punches you in the gut. It is the point in the movie where Diana has a decision to make. She has a job to do, a mission to accomplish, and not a single soul supports her. In fact, they are actively dissuading her from this choice. No one believes in her, no one is going to help, no one thinks she could possibly save the day. She’s brushed off like a cute little fly getting in their way.

It’s unlike any other scene I’ve ever seen in a superhero movie, and interestingly enough it almost didn’t make the film. To me, this scene is everything. This is every woman I know who has shown up on a farm, the boardroom, the exam room, or the surgery suite knowing she’s on her own in a hostile environment, rolled up her sleeves, and GOT SHIZZ DONE.

And last but not least, you get to see Robin Wright, aka Princess Buttercup and First Lady Claire Underwood, an actress in her 50s who is according to Hollywood trope should be long put out to pasture, doing this and looking 100% glorious:

Because in this world, much like the one in which we sometimes get to exist, the women get stronger with age.

Wonder Woman set a box office record for a movie helmed by a female director, a movie opening bigger than Iron Man and with a 93% rating on Rotten Tomatoes. It is an unmitigated success.

Even if you personally are not a woman, I bet you know someone who is. It’s a great film for everyone. It is not just a movie, it’s a reminder- that when women write our own stories, no matter what those may be, we can and do kick ass.

And you just can’t hear that enough.