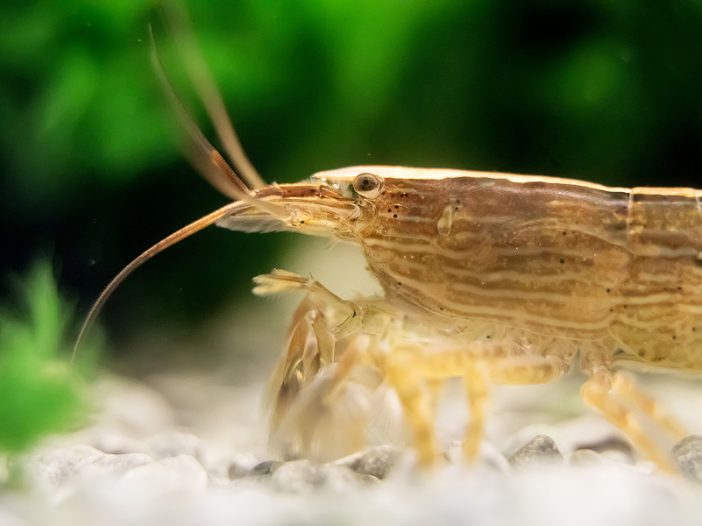 My latest aquarium obsession? Bamboo Shrimp. I stumbled upon them one day while Googling aquarium stuff when I was supposed to be working. I was delighted to find that my local fish store had them. I got one, hoping that I wouldn’t kill it. They often die within the first 2 weeks of introducing them to an aquarium, and I haven’t had the best luck with shrimp.

Mittsy did well, despite my inexperience. I could watch her for hours, holding her feeding fans up to the water flow and collecting small bits of food that she rotates into her mouth when the fan is full.

Bamboo shrimp have zero defenses. They are big and somewhat scary looking, but they are the most gentle of aquarium creatures. When startled, they tuck their fans in tightly to prevent them from being injured. The most beautiful part of themselves is also the most important – it’s what keeps them alive.

This is a video of Mittsy eating out of the filter flow.

Mittsy the Bamboo Shrimp from Andy Roark on Vimeo.

She is out in the open and completely vulnerable. She holds her delicate fans up high to catch whatever deliciousness might come her way. If she protects herself inside a rock, plant, or piece of wood, she may be safe from predators, but she’ll eventually starve. Instead, she chooses to reach out for all the good things that come from throwing yourself into the flow. When she molts, she is at her most vulnerable, and she will forego food to protect herself until she is strong again. That’s the smartest thing she can do.

She is often knocked around by inconsiderate, hungry fish. Sometimes, she reaches so high that the flow takes her, and she falls to the bottom of the tank. When this happens, she sweeps her fans through the sand looking for a snack before climbing right back into the churning water.

If you put a bunch of Bamboo shrimp in a tank, something awesome happens. Instead of fighting or shoving each other off their perch, they simply jostle around and make room. Sometimes they’ll stack themselves so everyone can eat together. They don’t necessarily help each other, but they at least do no harm to their companions. This, in my opinion, is the most stunning example of their bravery.

It’s tempting to hide from the world. I certainly find it easier to stay at home and work in a place of quiet and safety. There are rewards for that, but not nearly the rewards that come from putting myself out there and taking risks. I have so many more regrets about things I didn’t try than things I did. The more I try, the more fun I have, and the more I believe in myself. Sure, I have to stand back up and dust myself off when I tumble off my self-appointed pedestal. But I can take my cue from Mittsy and eat a snack or take a break before hauling my butt back up there

Fans up, people! If something isn’t working for you, reposition yourself so you can take advantage of all the good things that come your way. Brace yourself against those who may want to push you out of your flow. Reach out for and be someone who lifts others up. Above all, protect AND nourish yourself so you can show the world what makes you shine.