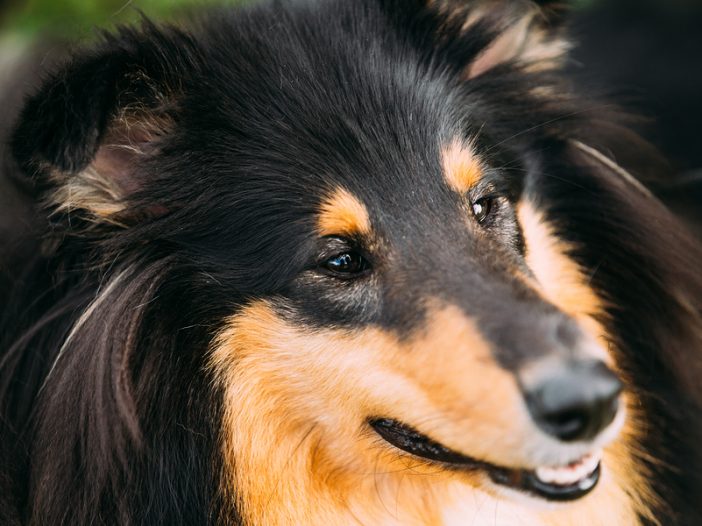 When I was in my second year of my veterinary technician program, we received a new group of dogs from one of our shelter partners. To my surprise, amongst all the loveable mutts was a purebred Rough Collie. I had fallen in love with the breed when I was a kennel student at the first practice I worked at, having treated one Rough Collie for several weeks and becoming completely smitten with his gentle and kind attitude.

Her name was Mable. According to the shelter, she was 8 years old and not spayed. She looked as old as dirt and was about the same color. I brought her out of her kennel and began quietly brushing out her matted coat, dismayed to find multiple large mammary masses and evidence of tapeworms in her tail. Seeing what kind of conditions she must have endured before ending up in the shelter, I vowed to spoil Mable and turn her into a beautiful, clean dog that would catch an adopter’s eye.

Mable stayed at my school for twice as long as the other dogs. We made sure she was vaccinated, dewormed and got her healthy enough for surgery. She was spayed and had about half of her mammary tumors removed – there were too many to remove in a single procedure.  The masses were sent away for histopathology, and I knew the odds were not going to be in Mable’s favor. She was nearing the end of her stay, and because of the likelihood that she had cancer, no one had applied to adopt her. She was the perfect dog – calm, affectionate, good with cats and dogs, friendly to all people, fully housetrained and never barked. I realized Mable’s future had two outcomes: either she had cancer and wouldn’t live much longer, or she didn’t have cancer and would live a few more years. Two days before the shelter was due to pick her up, I submitted my application (much to the displeasure of my parents). I was approved to adopt her, and she came home with me at the end of the week.

Mable experienced so many “firsts” during her initial months with me. She learned about stairs, and stove timers, about dog beds and car rides and how to walk on a leash. She learned basic commands, very slowly, and even learned to wave her paw for attention. The rescue had informed me of the abusive nature of her previous home, but Mable had a resilient disposition and was quite happy to learn that not all people were bad.

Mable was my first dog. We got to spend exactly two years and four months together. She was not a young dog when I adopted her, and good care couldn’t undo the neglect she had suffered prior to her rescue. Old age came for Mable sooner than it should have, and I realized that there wasn’t anything I could do to fix her. All the medicine available to us couldn’t repair her arthritic joints, and I knew it was my duty to ease her suffering. On our last day together I put her in the car and we drove to the best burger joint in town. I bought a cheeseburger and vanilla ice cream, and we went to the lake to eat. I thought Mable’s eyes were going to fall out of her head when she realized the food was for her! She ate and I cried, and when we were done we went to that practice where I had met my first Rough Collie. We lay down on the floor together, and I held her close, whispering in her ear about what a Good Dog she was.

It has been seven years since Mable passed, and I still cry when I think of the fond memories. One day, when I’m ready, I will adopt another senior dog in her honor.

Courtney lives in Ontario, Canada. She is a 2013 graduate of Georgian College’s Veterinary Technician program and has been a Registered Veterinary Technician since 2015. Courtney has been working in small animal hospitals since 2006 when she got her start as a kennel student. She is passionate about nutrition and preventive medicine. Courtney shares her home with one dog, two cats and a continual stream of foster kittens.