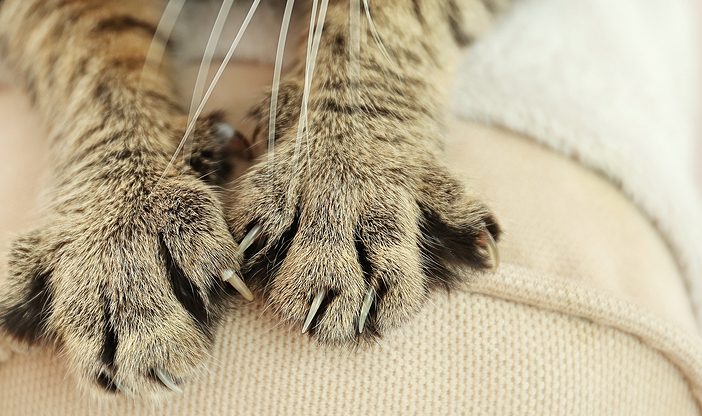 Some people in the general public would like to believe that declawing a cat is a friendly little procedure where those pesky nails are magically and painlessly removed and the cat is returned to them, neutralized and unable to destroy the furniture.

Even the word declaw, which is distinctly nonmedical, implies that it is no big deal. I think it’s a big deal. I suspect the cat does too. This procedure involves an amputation of the last portion of every digit through the joint. Usually this is done on the front paws. In Quebec, they sometimes declaw all four paws. Mon Dieu! That is messed up.

Despite, or maybe because of my exposure to veterinary practice from a young age, I have always been horrified by this procedure. As a child, I watched the procedure and then watched the cats recover; their bandaged bleeding paws curled under them, and a look on their faces that conveyed pain, betrayal and sadness to my childhood understanding of cat-speak.

I feel depressed just thinking about the way those cats looked at me. I have never been able to shake the feeling that this procedure is just wrong. I decided early on that when I became a veterinarian, I would not do declaws.

I have stuck to this promise to my feline friends. When I was an intern in 1996, the supervising surgeon tried to force me to do a declaw. She said that I had to do it because I needed to know how to do the procedure. She did not believe that as a licensed Doctor of Veterinary Medicine and adult person, that I could make this decision for myself. She lorded her considerable power over me. A pissing match ensued.

It was all unsaid, but I knew that I was facing a decision – kiss this woman’s ass like interns are supposed to (especially interns that want to be surgeons when they grow up) and declaw the cat, or refuse to do it and piss her off forever. I can remember sobbing on the phone to my dad, saying that I just couldn’t do it. (I chose the piss her off forever option and paid the price.)

During the three years I spent in general practice (trying to get a surgery residency) I continued to refuse to do this procedure. I would try my best to educate my clients. I would always start my new kitten exams by asking, “How is the training going?”

They always thought I meant litter box training and that was my awesome segue into how to train your kitten not to scratch the furniture. Then I would give them my amazing new kitten handout with tips to help them to train their kitten not to be destructive and to allow nail trims. I would explain to them what a declaw involved.

The antithesis to these attempts at client education was my boss. She believed that if you are going to declaw a cat, you should do it very young, because kittens tolerate it so much better than adults. She had a point, because declawing a kitten is definitely much easier on them than it is on an adult cat. Declawing a fat old cat is a tragedy.

However, the problem with this logic is that if you declaw kittens, you lose the opportunity to train them. It’s a catch 22. There have been major advances in pain control and surgical technique in the past 20 years that definitely help. Nerve blocks before the procedure, excellent new analgesics and even using a laser scalpel, have all been shown to decrease pain post operatively. That is all great, but I still think it is a rotten thing to do to a cat, and a rotten thing to ask of a professional who dedicates their life to helping animals.

When I was in general practice, I would always try to understand why the declaw was being requested. I once had clients bring in an adult cat for a declaw because Grandma was visiting for the holidays and they didn’t want the cat to rip up Grandma’s thin, crêpey skin. The cat had never been destructive or aggressive. They wanted to surgically alter their cat for Granny’s three-week visit.

I talked them into letting me put some nail caps on the cat. These are little rubber caps that can be glued over the nail to prevent damage to the furniture. They need to be changed every 6-8 weeks but they work great. They also come in fashionable colors. Grandma’s legs and the cat’s toes were spared. It was a Christmas miracle.

For some people, there is no talking to them or educating them. As soon as I tried, they would shut me down. They would say things like, “The only cat I will have in my house is a declawed cat.”  Sometimes it was a husband-wife issue. “My husband won’t let me have a cat unless it is declawed.” There is so much wrong with that statement that I don’t even know where to start. And this is the dilemma that has been both thrust upon, and created by our profession.

There are so many homeless cats and the ones that end up in a shelter usually are soon-to-be dead cats. That is the reality. They are basically a disposable pet and yes, people do dispose of them when they are not enjoying them any more. Usually the enjoyment ends around the time when the couch is getting scratched, the litter box stinks and there is cat hair everywhere.

This is a horrible position that veterinarians have been put in/have put ourselves in. As a profession, we acquiesce and accept this procedure, with the hope that this means that these cats will have good homes and lives. (This is sometimes true, but not always.) It’s fine to be a vet who refuses to do declaws, but every vet who refuses to do declaws knows deep down that one of their colleagues will have to take on this burden for them.

Our clients demand this service and they threaten us with the promise that they will euthanize or dump their cat if it is destructive or has claws. What if we called their bluff? What if we actually told a client that if they don’t want their pet anymore, they should take them to the animal shelter. A lot of people would probably do just that. A lot of people do that anyway.

This service of declawing was obviously started by veterinarians. Now we can’t/won’t stop. It is banned or simply not practiced everywhere outside of North America (UK, Australia, New Zealand, most of Europe). And there are regions within North America where declawing is banned. So the rest of the world has to deal with alternatives. Why can’t we?

Our North American society is addicted to the convenience of dropping the cat off and returning it with no claws. Instead of training, buying a scratching post, clipping nails, using nail caps, and possibly dealing with the fact that life with pets (and kids) is a bit messy.

I suspect that a group of cat owners would stop having cats, another group would use nail caps or train them, a group of cats would be dumped at the shelter, and shelters would continue to be overrun by unwanted cats. Eventually, a new cat equilibrium would be reached.

This issue is polarizing for our profession, which is why we don’t like to talk about it. I believe that all veterinarians are trying to do the right thing for our feline patients, in doing and not doing this procedure. We just don’t all agree on what the best thing is. However, I believe that this conversation and decision should be made by veterinary professionals and not the court of the internet or pubic opinion.