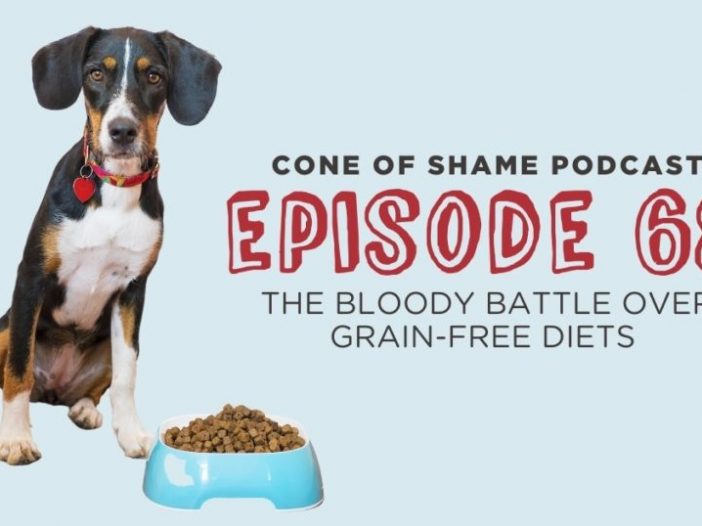 This week on the Cone… Dr. Andy Roark talks to the Skept Vet himself, Dr. Brennan McKenzie about a topic that seems to get blood boiling among veterinarians, vet nutritionists, pet owners, breeders and dog food manufacturers. Why are we divided about grain-free pet foods, and what does the research really say?

Dr. McKenzie has always pursued a wide range of interests both within and outside of science. After completing a bachelor’s degree with majors in English Literature and Biology at the University of California at Santa Cruz, he obtained a Master’s in Physiology and Animal Behavior and worked for several years in environmental and behavioral enrichment for captive primates.

Dr. McKenzie then attended the School of Veterinary Medicine at the University of Pennsylvania and began working as a small animal general practice veterinarian. In addition to his clinical work, he has served as President of the Evidence-Based Veterinary Medicine Association, lectured on evidence-based medicine at numerous veterinary conferences, and published journal articles on such topics as overdiagnosis, cognitive bias in veterinary clinical decision-making, and the philosophical underpinnings of evidence-based and alternative medicine. Since 2009, Dr. McKenzie has managed the SkeptVetBlog and associated social media outlets, including a series of science-based pet health videos on YouTube. He has also been an occasional contributor to the popular Science-based Medicine blog.

While working as a practitioner, speaker and writer, Dr. McKenzie has continued to pursue post-graduate training and completed his MSc in Epidemiology at the London School of Hygiene and Tropical Medicine in 2015. He also teaches veterinary students in his practice as well as undergraduate biology majors, he writes a monthly column on evidence-based medicine for Veterinary Practice News magazine, and he has published a book for pet owners and veterinary professionals — “Placebos for Pets? The Truth About Alternative Medicine in Animals”.

In his sparse free time, Dr. McKenzie enjoys reading, hiking, playing his mandolin and guitar, traveling with his family and sitting on the couch with his dogs watching the hummingbirds and woodpeckers outside his living room window.