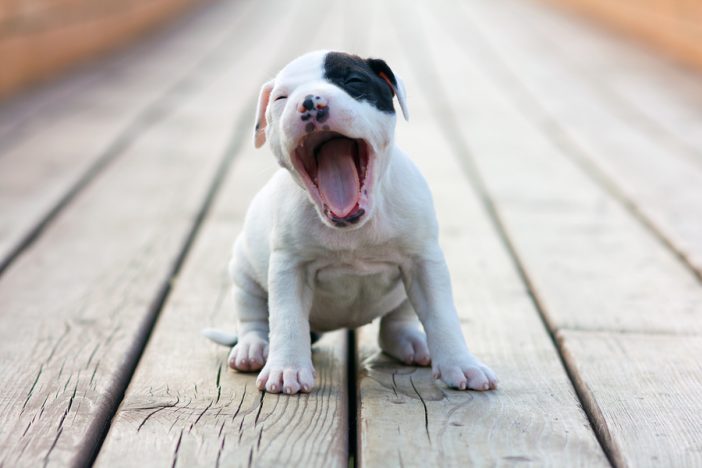 Years ago, I worked for a small animal clinic in Fleming Island, Florida. The area was becoming more developed, but there was still a lot of rural area around, with a majority of old country folks living there. Our clinic saw mostly dogs and cats, with birds and exotics making up the balance.

One day, an older lady showed up without an appointment. To all appearances, this lady didn’t have two pennies to rub together. Mrs. Strange was thin, with much-worn clothes and the sallow complexion of a lifelong smoker. The dog with her wasn’t much better off. The older black pit bull, Coal, was emaciated but with a swollen, pendulous belly and a wicked cough. It was clear, however, that she loved this dog with all her heart.

Coal was Mrs. Strange’s companion and protector while her husband drove a long-haul tractor trailer for days or even weeks at a time. The dog had even kept Mr. Strange from entering his own home one late night when he returned home from a run a few days early. Not until he reassured the dog, ‘Coal, it’s Daddy,” was the gentleman of the house allowed in.

Coal was somewhere around ten years old, and had never been on heartworm preventative. As a matter of fact, he hadn’t been seen by a vet since he was a puppy.

Certain that most of the diagnostics I offered would be refused, I was mildly surprised when Mrs. Strange agreed to blood work and a heartworm test. Unfortunately, we didn’t get as far as the ELISA test; a direct smear revealed more microfilaria (heartworm larvae) than red blood cells. And, just in case there was any doubt, Coal coughed up an adult heartworm onto the exam room floor. Clearly, the prognosis was bad.

Dr. Mike Ricker explained everything to Mrs. Strange and she opted to take him home and think about what to do. In as poor a condition as this dog was, treatment might even prove fatal. We offered to refer them to the University for a modified treatment that might be less stressful thinking anything we could do to help this poor, sick dog should be discussed.

Mrs. Strange’s husband was due home; She wanted him to be a part of the decision. We sent her home with medication to make Coal more comfortable, and she paid her bill in full with cash. We honestly didn’t expect to hear from them again, except perhaps to be told that Coal had died on his own.

The next day they called and scheduled euthanasia. Mrs. Strange and her husband came at midday with Coal. Mr Strange looked much like one would expect a long-haul trucker to look; long grey hair, ball cap, worn and faded jeans and a t-shirt advertising a far-away truck stop. We spent a surprising lunch hour laughing and crying along with them while they said goodbye to their Coal. Once again, they paid their bill in cash and took Coal to bury him at the only home he’d known.

Once more, we never expected to see them again.

In areas with rural residents who are used to doing for themselves, it’s not uncommon to have pets brought in at death’s door. The owners often hope we can work some kind of miracle to snatch their pet from the brink. They feed their dogs table scraps and Old Roy, get their vaccines from the feed store, and do their doctoring at home. Only when something is beyond their abilities do they seek help. Educating these people out of their self-sufficient mindset seems practically impossible.

Two days after Coal’s passing, Mr. and Mrs. Strange called to make an appointment for a new puppy. They came that very afternoon with the most beautiful red-nosed pit bull puppy I’d ever seen. Her name was Ruby and we all fell in love with her. No one was more smitten than her proud new parents.

We were told they wanted to do everything right by this dog. Ruby wanted for nothing; she was fully vaccinated and promptly started on heartworm preventative. Ruby’s owners followed our instructions to the letter, always grateful and appreciative of our help.

Over the next year, they presented us with two more red-nosed additions to their family. Both of them were accorded the same complete and loving care as Ruby. Mr. and Mrs. Strange became some of our favorite clients, and I looked forward to their visits.

Most of all, these people taught me a valuable lesson. Appearances are deceiving, sometimes in a good way. If we had all assumed that they were (and treated them like) uncaring pet caretakers because of their first dog’s condition, I’m willing to bet they never would have come back.

Never assume you know someone’s story just because of how they look or act. Coal may have been a medical nightmare, but he was loved. The feelings his owners had for him ensured his successors were the most pampered, healthiest and happiest dogs I’ve ever known. I was, and still am, grateful for the lesson.

Debi Matlack is that rarest of creatures, a native-born Floridian. She still lives there with her husband, another Native Floridian, and four cats. She hopes that someday her writing might prove popular enough to support her in the manner to which she would like to become accustomed, probably becoming a crazy cat lady (but a well-financed one).