Since pets can’t just speak up and tell us when they’re experiencing pain, we have to keep a lookout for clues. This week, Dr. Andy shares 8 subtle signs that your fur baby may be struggling.

I have an actor friend with tremendous talent and a love of literature. One day while we were walking together after a Shakespeare in the Park performance, she revealed a long-time dream of hers. She does not currently own a dog but one day she wants to have a basset hound and name it August.

I’m not doing the name justice here: she pronounces it “Au-GOOS-t,” with the “t” just barely included. She went on to describe the birth/adoption announcements she would send out, to let her friends know that the day had arrived: her long-awaited basset hound was finally snuggled beside her. 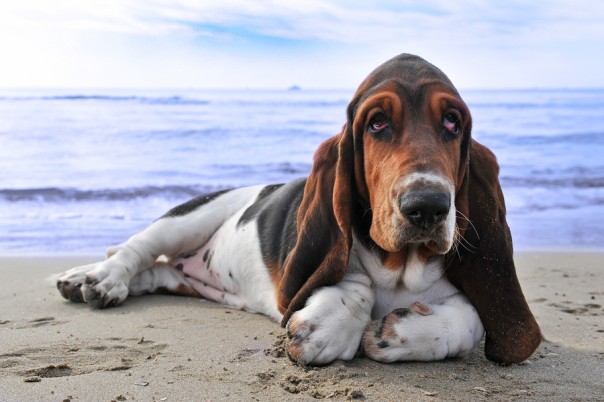 Can we all pause and agree that basset hounds are adorable [see beach basset above]? I’m not expressing too much breed bias but there is nothing more endearing to me than a floppy-eared, baleful little basset hound staring up at you, wondering if you’re going to share that piece of cheese you’re eating (the answer is always YES, but only a portion). But when you add the name “August” to it, the dog becomes charmingly dignified. Suddenly, he’s a German ambassador and everything he does, from tripping over his own ears to enjoying yet another classic hound nap in the sun, becomes stately. It’s glorious.

In my world, names are one of the best parts about getting anything. I’ve named every one of my cars and even got to name my family’s wheaten terrier when I was 13 (I chose Duncan after the good king in Macbeth; I was a pretentious little tyke).

Doggyloot.com just revealed the top ten names for dogs in 2014. Please allow me to break down the top three of both genders.

Both these names require the dog to live up to pretty high standards, and pave the way for unparalleled sibling rivalry. The British English Dictionary defines “max” as: “The most significant, highest, furthest, or greatest thing.” If you have more than one dog, I’d suggest naming your tallest dog Max, so the name can be in reference to his height, not his character. Unless you name your other dog Awesome, so they can be equals.

Bella is a wonderful name for a dog who isn’t actually beautiful. Let’s give that adorably funky shelter dog you just rescued a chance to be what it has never been considered before! Many attribute the rise in this name to the popularity of the Twilight book series but I have faith; I think it’s because we’re all just really big fans of Bela Fleck, not a book series about shimmering, moody teens who like to suck blood (c’mon, what teenager DOESN’T?).

OK, real talk – I only call a person “buddy” when I’m getting annoyed with someone or I’m trying to make sure a guy knows he’s in the friend zone. In my world, this name has one purpose: to passively show the recipient you’re done playing and in about five minutes they can expect a cold shoulder that would rival a house cat’s ritual of ignoring people. 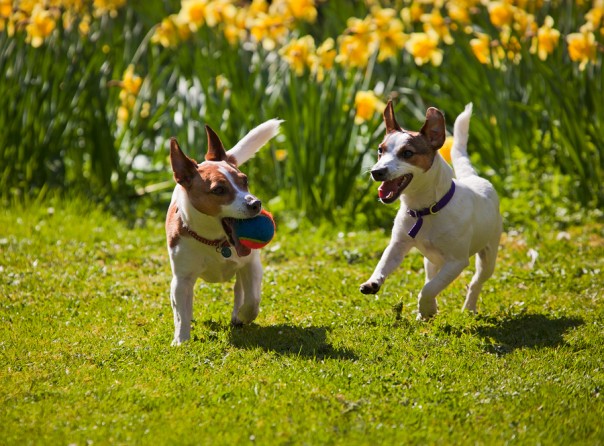 You could name both of these Jack Russells Molly – but I guess that’s confusing.

I’ve never met a Molly that I disliked. And if you’re in your late twenties like I am, you’ll probably remember Molly the American Girl doll. She’s a patriotic firecracker from the Second World War era and her glasses are awesome. Who doesn’t want a Jack Russell named after a resourceful tweenager who loves her country?

I’ve never seen the movie Rocky, but I can tell you that the only reason I’d name my dog after it is to be “that girl.” You know, the one that cooks a great steak, flipping LOVES football (PACKERS!!!), AND can do a great cartwheel. Currently, only one of these statements about me is true. I’ll let you decide which one.

Everyone wants a song they can sing to their dog. My family has a dog named “Blueberry” and I can’t tell you how many renditions I’ve sung of “Blueberry Hill.” So why not name your dog after “Lucy in the Sky with Diamonds” by The Beatles?

You can and should see the whole list of names – maybe your pet’s name is on there! I love to see how people pick names for their pets. Whether you come up with a moniker before meeting the dog or wait to be inspired, your pooch has a story and a character all his own. And every time I meet a new dog, it’s fun to see how the name helps define their character.

Meg began her stage career in 2004 with Clemson University’s improv comedy group. During her time at Clemson, she trained in Atlanta, Chicago, and Chapel Hill and performed across the Southeast. Meg has performed with the Upstate Shakespeare Festival, Greenville Little Theater, and two regional improv companies. Currently she works as an actor, production assistant, and comedic writer for Cone of Shame. She has appeared in and provided voice over work for a number of videos for IDEXX, Vetstreet, and DVM360. Meg performs regularly as a founding member with Alchemy Comedy in Greenville, South Carolina, and teaches improv courses.

In this episode, Dr. Andy takes you inside the mind of a cat to explore the mysterious things your cat does every day. This episode was generously sponsored by SuperCat from Quaker Pet Group. Check out their entire line at http://www.supercatproducts.com, or search for them on http://www.amazon.com.

As I reflect on the Thanksgiving holiday, most of the things I’m thankful for sound a bit cliché. I’m thankful for my health and the health of my family, the people I work with who make my job great, and the pet owners who bring their pets to me and do right by them. I’m glad for the freedoms I have (thank you veterans) and the opportunities to do what I love. I think most of us could easily put together a “gratitude list” very similar to this in just a few moments.

But what about the truly important things that we don’t talk about so freely? What are the gifts we don’t discuss, but that make our lives SO much more rewarding? Here is my top 5:

1) Colleagues who listen without judgment.

We all know that getting a second opinion or seeking the wisdom of experience makes great sense for our patients and our own development. Still, we’re also all a bit insecure and hesitant to admit that we may not know what’s best in every situation.

That’s why I’m grateful for those colleagues (veterinarians, managers, technicians, etc) who happily answer questions and share advice in the exact way that they would want to receive it. These people are also the ones secure enough to ask me questions and give me the opportunity to return their favors.

2) Technicians who understand that I want to help.

To be honest, I can be a bit hard to work for if you’re not someone who loves to learn. I ask questions, quiz people, and teach whenever I can. I push people to be their best, and I know that sometimes life would be easier if I would just stop.

Medicine is a dance, and it’s much more fun (and effective) to dance with people who know the steps and jump right into doing them. I’m thankful for the technicians who know their business and don’t wait for me (or any other vet) to tell them what to do. These technicians are pure professionals, and working with them is an eye-opening, job-changing experience. Every vet should be blessed to have the experience.

4) Pet owners who have questions.

I had a pet owner in the clinic earlier this week that apologized profusely for the list of questions she brought with her. I love people like this. I want to share my knowledge with them, and I know they will get a lot out of my time. I also know that their pet will benefit greatly from our time together. These pet owners are dedicated and I am always grateful for them.

You know those pet owners that send Thank You notes when their pets get better or even bring in pans of brownies over the holidays? I’m grateful for those people. You know the drug reps that genuinely want to help our practices improve and bring us educational opportunities and encouragement we wouldn’t otherwise get? I love those guys. And those specialists that call you right back, answer your questions and make you feel like they’ll be there if you need them? Yeah, those guys are awesome as well. These people are all partners in the mental health, happiness, and success of veterinary teams. They all mean the world to me, and I plan to do a better job of letting them know it from here on out.

So there you have it. Those are my top 5 not-top-of-mind gifts that I’m grateful for this Thanksgiving. If you come into contact with any of these people, please tell them “Thank You” from me… or possibly from you.

Have a wonderful Thanksgiving! 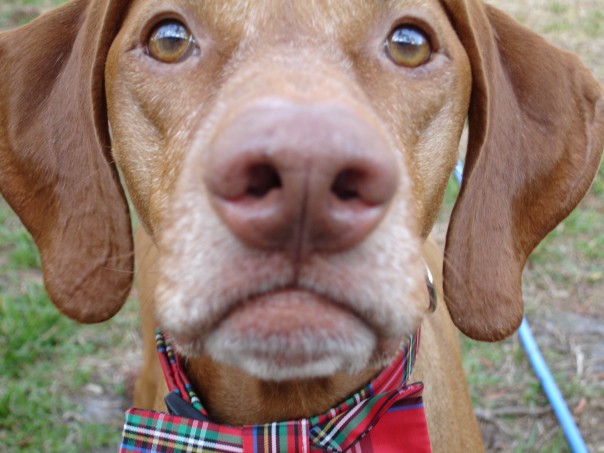 Before my wife and I had children, we got a puppy together. Preparing for the dog was an elaborate process that involved reading everything we could get our hands on, picking just the right bedding and toys, and, of course, choosing a name. We asked friends, made lists, and Googled foreign language baby names to get ideas. The name had to be just right.

Ever since that 1st-time pet parent ordeal, I get a special kind of joy from meeting pets that have been wonderfully named. I love pet names that are descriptive, unique, creative, funny and/or fun to say. Recently, I asked my Facebook fans to share names of pets they know that fit this description. Here are my 25 favorite responses.

I give Dr. Andy Roark [Represented by Tall Oaks Enterprises, LLC] permission to use photographs taken by me, that I have provided, in his social media content, promotional materials and publicity efforts.

I understand that these photographs may be used in any publication, print ad, direct-mail piece, electronic media (e.g. video, Internet, Web site) or other form of promotion in perpetuity without remuneration or further consent.

I warrant that I hold all rights to these photographs, including the right to freely give the image to Dr. Roark for reproduction and/or repurposing without remuneration or profit, and I will make no monetary claim against Dr. Roark for the use of the photographs. I further warrant that, if applicable, I have obtained necessary releases from the subjects, owners or licensors appearing in this image and that I shall bear any legal claim against the veracity of these statements and will hold harmless Dr. Roark and his assigns. I understand that Dr. Roark will run a photo credit if possible, but is under no obligation to do so.