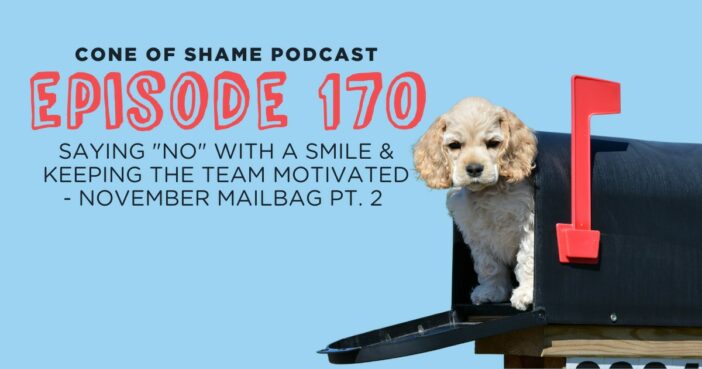 Questions in this episode:

How involved should associate veterinarians be with boarding in the clinic?

What are the best things to do for your staff on one of those crazy days when everything is on fire to keep them motivated ?

What’s the best thing to do when you’re feeling overwhelmed?

What advice would you give those that have trouble making boundaries at work?

How do you bridge the gap between “front and back”?

How do you coach someone that gives very blunt delivery of feedback and rubs people the wrong way?

Cone Of Shame Veterinary Podcast · COS – 170 – Saying "No" With A Smile & Keeping The Team Motivated – November Mailbag Pt. 2

You can also listen to this episode on Apple Podcasts, Google Podcasts, Amazon Music, Soundcloud, YouTube or wherever you get your podcasts!

This podcast transcript is made possible thanks to a generous gift from Banfield Pet Hospital, which is striving to increase accessibility and inclusivity across the veterinary profession. Click here to learn more about Equity, Inclusion & Diversity at Banfield.

Dr. Andy Roark:
Welcome everybody to The Cone of Shame Veterinary Podcast. I am your host, Dr. Andy Roark. Guys, I’m back experimenting. This is Part 2 of my recent experiment of live streaming the podcast into the Uncharted community and so, I got questions from the Uncharted Veterinary community. If you’re not familiar with those guys, you can check them out at unchartedvet.com. It is where I spend a lot of time hanging out talking about leadership and communication and management and stuff like that that I love. But anyway, I’m here with these guys and just going to go through questions that I got from them and that will be it, so let’s see.
Yeah, I’d love to hear your feedback on this podcast. If you like it, you can send me an email at podcast@drandyroark.com. You can also leave me a review wherever you get your podcast. But I really haven’t decided if I’m going to do more episodes like this. I’m really kind of waiting to see if people tell me that they like them and I can tell you, I really enjoyed the first one, so this has been really fun.
If you’re listening and you’re like, “Man, these questions where Andy is just talking through problems that people ask him about, I really, really love them,” I have another podcast, it’s called Uncharted Veterinary Podcast and I do it with my friend, practice management goddess, Stephanie Goss. And that’s all we do there, is breakdown questions about practice that people ask us. So, if you really love this, no matter what, you can have more of me talking about problems at the Uncharted Veterinary Podcast, which is the other podcast that I do. All right, let me go ahead and let’s get into this episode.

Kelsey Beth Carpenter:
(singing) This is your show. We’re glad you’re here. We want to help you in your veterinary career. Welcome to The Cone of Shame with Dr. Andy Roark.