“What we have once enjoyed deeply we can never lose. All that we love deeply becomes a part of us.”

I read a beautiful post today by Dr. Jessica Vogelsang (pawcurious.com) about the relationship between her terminally ill mother and her Golden Retriever during the last months of her mother’s life. Her words brought the first of the tears that threaten me daily this time of year.

My mother would have turned 70 this past January. She died on May 18, 1993, nine days after I had my fifteenth birthday party for the family in a waiting room at Sibley Hospital. Every spring, when May hovers close, its sweet green smell, hay fever, dogwood blossoms, and bird songs signal the imminence of Mother’s Day, and the anniversary of her death. 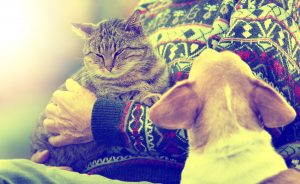 chemotherapy for lymphoma, and seen her through to remission.  There must be so many stories like this and to protect myself, I often don’t ask to hear them, for which I feel selfish. My own mother spent her 18 months of chemo in a big blue chair with two cats and an afghan draped over her lap. Much later, I became (among other things) the agent who stands by while loving owners whisper goodbyes to the small warm caretakers of their daily lives. I can begin now to imagine how my dad must have felt when my mother’s lap cats died. They were her bodyguards and her pain medication, and sometimes I think they were the metronome behind her beating heart.

Pets aren’t for everyone. I believe there are some people who can never know, or desire to know, what it’s like to have an animal embed itself so deeply in your life and your heart that losing it will tear fibers apart that can’t be sewn together again. For those of us who do know, the pain is exquisite, but made bearable by the love. 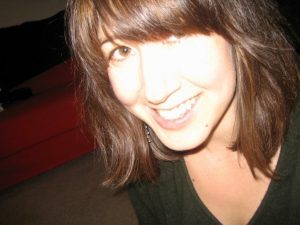 Dr. Katie Berlin is a small animal general practitioner in Mechanicsburg, PA. She is also a reader, a rider, a runner, a lifter, a teacher, and an art lover. She graduated from Williams College in 2000 with a degree in Art History and worked in art museums before going back to school and earning her DVM from Cornell in 2009. She is an avid supporter of Fear Free practice and the battle against compassion fatigue in the veterinary profession.

Back in ancient times shortly after vet school graduation, I sat to dinner with a recently minted MD and we commiserated about people giving us a hard time about our ages.

That option was out for me, so I cut my hair into an unflattering soccer mom ‘do (it was the early 2000s. We did horrible things back then), dyed it mousy brown, and added glasses in an attempt to make myself appear older and wiser. I don’t really know if it helped. Despite all these efforts and the lab coat with “Dr. Vogelsang” embroidered on it, I would constantly have clients ask me when the doctor was coming in the room. As the years passed and I clearly became old enough to be a doctor, the question persisted. I began to wonder if my age wasn’t the problem.

I once worked for two doctors, a man and a woman who were friends and business partners. He always introduced himself by his first name: “Hi, I’m Peter Foster.” Clients loved it, and afterwards continued to call him Dr. Foster. She did as well: “Hi, I’m Amy Sterling.” It was 50/50 at best whether or not clients called her Amy or Dr. Sterling after that. They usually called her Amy when they were about to complain about something or to see if she would run something by Dr. Foster despite the fact that she was more experienced and essentially his boss.

I guess I am old fashioned in that I prefer people to use proper titles, within context. When I go to my own doctor’s office, I refer to them by their title; it’s about respect, right? In a social context I would use their first name. It’s easier to let go of that need when it doesn’t have an impact on whether or not clients treat your recommendations with the weight your degree gives them, but from my own observations, the clients who want to call me Jessica (or god forbid shorten it to Jess, a fireable offense in my opinion) are also the ones who minimize my expertise.

You’d think that as I got older, this would bother me less. The opposite is true. For a long time I would keep my discomfort to myself, because who wants to be perceived as overly sensitive? Or God forbid, shrill? Maybe it was my fault for not seeming confident enough. Maybe I was being too sensitive. So for years, when people would ask for my first name after I specifically left it out of my introduction, I’d just smile and give it before confirming yes, Dr. Foster thought my recommendations were a good idea.

Most professional women I know have gone through the same internal debate wondering if this was all in our heads. A recent paper in the Journal of Women’s Health showed that when doctors introduced other doctors in a grand rounds environment, women were more likely to use a professional title. Men were less likely to use the title of doctor overall, and even less likely when it was a woman they were introducing. To summarize how often people were introduced using their professional title:

It’s hard to discuss these things because it always seems to segue into a “here we go again hating on men” thing. It’s not true. I love men, promise. I married one and I work with one and I admire lots of them. I have been supported and championed by men who want to do the right thing and I am so grateful for that. Are we clear on this? OK, good. The good men I know don’t shy away from listening to me when I share my experiences. When we’re too scared to share our reality because we don’t want to hurt someone’s feelings, we all lose. I don’t know why this shakes out the way it does, but there’s the numbers so at least we can all breathe a sigh of relief that we aren’t making it all up in our heads.

The biggest takeaway from this study, at least for me, is that women seem to care more about professional titles in general, regardless of whom they are addressing. Perhaps this is because for many of us, we rely on it to reinforce our expertise, or we sense when it is being left out as a conscious or subconscious means to minimize us. Perhaps men don’t care as much because they don’t need that title as much? I don’t know. Maybe some day we will understand more.

For now, I’m going to continue to be That Person and love other people who support me in this crusade. I once overheard one of the greatest technicians and friends in existence, my friend Amber, having this conversation on the phone: “Jessica? Who’s that? We don’t have a Jessica here….Oh, you mean DOCTOR VOGELSANG? I’ll take a message.” Did I mention she was the greatest? Because she is. She has three sons and a daughter now, and I am sure they are also going to be the greatest.

To all the strong and wonderful women doctors I know: It’s OK to want that title, and to correct someone when it is left out. We earned it. Don’t be afraid to hold it close, and be generous with its use with our colleagues. It does mean something. To all the strong and wonderful male doctors I know: Thanks for calling me Doc. I promise to do the same for you.