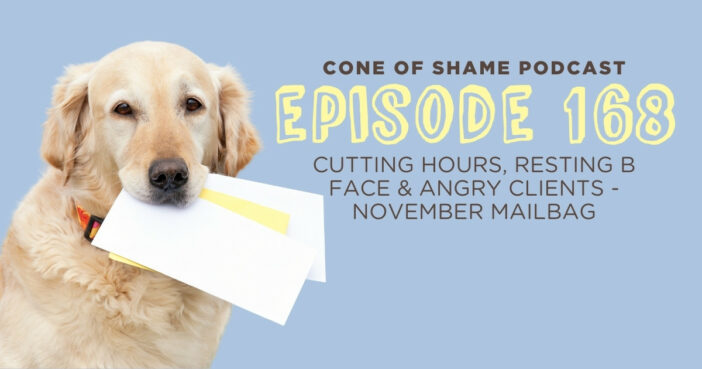 Dr. Andy Roark does the FIRST EVER Live-Stream episode of the Cone of Shame. This episode was streamed into the Uncharted Veterinary Community and features a Q&A session.

Questions in this episode:

I’m overwhelmed. Do you recommend I just cut back hours and turn people away?

How do you tell an employee she/he has a “Resting B@#$ Face”?

What can you do to “reset” when you are spiraling into negativity?

What are the top 5 soft skills you look for in an employee?

What are your top 5 educational opportunities for CSR’s, Techs, Assistants, etc.

Do you have a script for an irate client on the phone?

You can also listen to this episode on Apple Podcasts, Google Podcasts, Amazon Music, Soundcloud, YouTube or wherever you get your podcasts!

This podcast transcript is made possible thanks to a generous gift from Banfield Pet Hospital, which is striving to increase accessibility and inclusivity across the veterinary profession. Click here to learn more about Equity, Inclusion & Diversity at Banfield.

Dr. Andy Roark:
Welcome to The Cone of Shame Veterinary Podcast everybody, I am your host, Dr. Andy Roark. I am going to try something new today. So this is our first ever mail bag episode. I’ve been wanting to do one of these for a long time, I’ve just taken a little while and cranking out some questions from our audience. I went to the Uncharted community, so if you’re not familiar with Uncharted, it is a community and series of conferences live and virtual where we do leadership and development training and conversations and things like that. And so it is a super positive place, super active and engaged place, it makes me just happy to be there. It’s a lot of really great vet professionals who enjoy vet medicine. And so anyway, I opened up to them and just said, “Hey guys, I’m playing around with this idea, will you give me some questions that you would like for me to answer?” And boy, they responded and so I have got way more questions than I’m going to get through today, but I just wanted to jump on and take a crack at them.

Kelsey Beth Carpenter:
(Singing) This is your show, we’re glad you’re here, we want to help you in your veterinary career, welcome to the Cone of Shame with Dr. Andy Roark.